GET A FREE CONSULTATION

Contact us today for a FREE, no-risk initial consolation

Assault and battery arrests resulting in charges among the most common alleged crimes in Texas. If you or a loved one have been accused of these violent crimes, don’t leave your freedom and reputation up to chance.

With penalties ranging from inconvenient to severe, you want to know you have a legal team in your corner that is dedicated to providing you with the attention and support you deserve.

Call or message us today for a free initial consultation and to find out why so many individuals and families across the state of Texas trust us to clear their good name.

The right criminal defense lawyer can help clear your name, save your reputation, and keep you out of jail. Put our decades of experience to work for you and let us do everything we can to help you achieve an optimal outcome.

The right strategy, combined with aggressive representation, can put you in a favorable position to negotiate a plea, get your case dropped, or obtain an innocent verdict in the courtroom.

Our firm has helped countless individuals across the great state of Texas fight for their rights, assert their innocence and get the justice they deserve. Make sure you have the right ally in your corner. Call or message us today and get in touch with a Texas assault defense attorney with the experience to help you win.

Are Assault and Battery the Same in Texas?

Some states combine the crimes of assault and battery under a singular offense, while others opt to charge them separately as their own independent offenses. In Texas, the crimes of assault and battery fall under § 22.01 of the Penal Code and are combined into a single criminal offense. Confused about the charges against you? Give our team a call to discuss your case. Our friendly and knowledgeable attorneys are ready to help.

A common misconception is that assault involves physical contact. The act of assault does not have to involve physical touch in order for a crime to have been committed and charges filed against you.

Assault charges can vary, ranging from a much less serious Class C misdemeanor (carrying a fine only), up to a 1st degree felony with penalties up to life in prison. Due to the seriousness of these charges, seeking out qualified legal counsel and representation as soon as possible is key to asserting your innocence and defending your case.

In Texas, the crime of simple assault is defined as:

Penalties for these charges range from 2 years up to a life sentence to prison, and a fine upwards of $10,000.

Aggravating factors that can contribute to the severity of the potential penalties include:

An individual may be charged with aggravated assault under §22.02 of the Texas Penal Code in such cases where an assault has taken place and any of the following apply:

Although typically charged as a 2nd degree felony, any of the following may result in upgrading the charge to a 1st degree felony:

Although charged under the same penal code, the act of battery differs from assault in that the crime involves the act of physical touching or contact that results in bodily harm. As it relates to battery, Texas law does not require that the level of harm reach a particular threshold in order for charges to be filed and an arrest made.

Because some types of assault are verbal in nature, reliance on key witness testimony from the scene of the alleged crime, as well as any other electronic evidence is key to asserting and proving your innocence. Past histories between the parties involved, as well as their overall character, criminal history, history of aggression or violence, lying, and more, can all bolster your case and are avenues we can investigate and explore, among other tactics.

At Manuel Diaz Law Firm, PC, our team can help you explore a range of defense possibilities best suited to your unique situation.

Examples of Potential Defense Tactics May Include:

The Criminal Justice Process in Texas 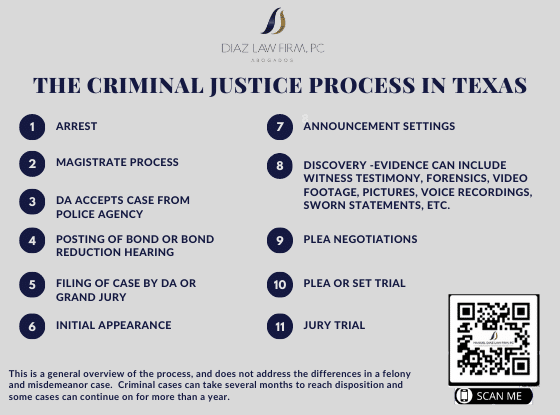 We proudly serve the greater communities of Dallas, Fort Worth, and San Antonio

Contact Our Ft. Worth Office For A Free Consultation

Contact Our San Antonio Office For A Free Consultation

Don’t Leave your Freedom to Chance

Assault and battery charges are serious, with penalties ranging from steep fines to serious prison time. Those found guilty will not only lose faith from the community at large, but they will also be left with a blemish on their permanent criminal record that is both embarrassing as well as restrictive.

Those with convictions may lose certain rights (such as the ability to own a firearm or vote), have difficulty finding gainful employment, and have issues finding housing or obtaining a loan.

Don’t trust your life to just any law firm. Hire a Texas assault defense attorney with the experience, compassion and dedication to fight steadfastly in your corner. Our talented team of lawyers is ready to put our considerable resources to work for you.

Contact our law firm today for a free, no-obligation initial consultation and to find out why so many individuals and families in Texas trust our top-rated, award-winning team to clear their name.