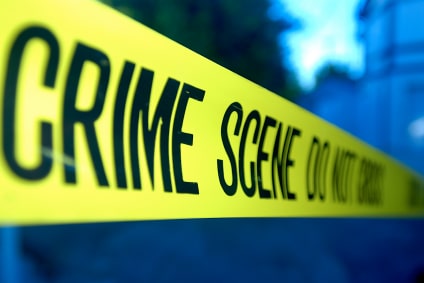 If you are accused of a crime, it is of utmost importance that you seek out counsel from a criminal defense attorney, even if you already have a state-appointed attorney. Without a defense lawyer, you may have your sentence extended, have unfair probation terms, or have other severe consequences. The presence of a lawyer can help guide you through the legal process. Your attorney will be able to organize your paperwork, present your side, review the evidence, determine if a plea is in your favor and contest the accusations against you.

With our help, your experience in the justice system may become less painful. As most people don’t have legal training, your lawyer will be better equipped to defend you in court, guide you through the process, and do everything in our power to get your case thrown out. Contact Manuel Diaz Law Firm, PC today if you are interested in speaking with an experienced criminal defense attorney that will be dedicated to you and your individual case.

What is Criminal Defense?

Criminal Defense typically is needed when an individual is accused of a crime. Though we also specialize in other areas of law, such as civil, family, and immigration, criminal defense is one of our strengths. Any time someone is accused of a crime, they must first be convicted or found guilty in a trial or by plea in order to receive their sentence. A criminal defense attorney is present throughout the process of indictment all the way to the final verdict to ensure that each client is guided through the legal system. In any criminal case, the defendant can choose to have representation, a court-appointed lawyer, or represent himself. Though the option to represent yourself is present, it is never recommended. You would not perform surgery on yourself if you needed one, right!? And would like to have the best doctor performing such a procedure, correct? Having the right counsel through the legal system is the same! It will be a relief knowing you have someone on your back taking care of you and guiding you through the many complexities of the legal system including rules of evidence, documentation, court proceedings, sentencing guidelines, and so on.

The Genre of Crime

There are many genres of criminal activity, all ranging in severity. This severity can range from physical or economic damage, injury, and even death. Depending on the severity of the situation will determine the potential punishment and the seriousness of the case. For example, if the case pertains to death, the sentence could span decades, even life in prison.

The following are the 7 most common types of crime, defined as Titles in the Texas penal code. Each is a punishable offense in the eyes of the law. If you are accused of any of the following, it is always wise to seek out legal representation. 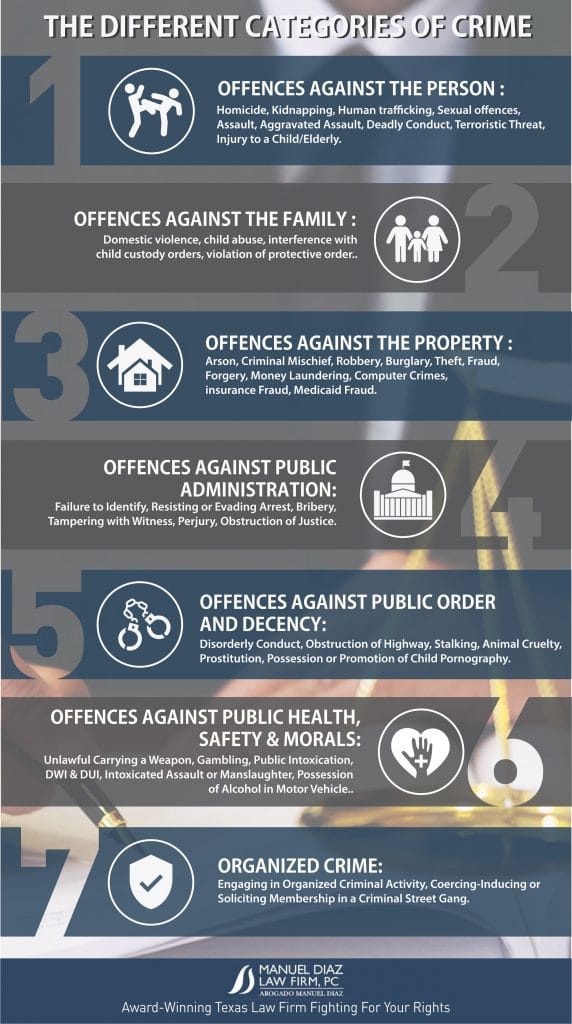 Offenses against the person

Offenses against a person are in reference to actions with the intent of harm or harm committed against another person or individual. For instance, if you are accused of having hit someone you could be accused of Assault. These offenses typically range from misdemeanors to capital offenses. Some of these offenses include Homicide, Kidnapping, Human trafficking, Sexual offenses, Indecency With a Child, Assault, Aggravated Assault, Improper Relationship Between Educator and Student, Unlawful Disclosure or Promotion of Intimate Visual Material, Deadly Conduct, Terroristic Threat, Injury to a Child/Elderly, Public Lewdness, etc. If you or a loved one have been accused of physical misconduct pertaining to harming another person, contacting a criminal lawyer is important.

Offenses against the family

Like crimes against a person, offenses against a family are actions with the intent of harm or harm committed against another person or individual that is a family relative or in the same household. (Yes, your roommate counts as a family). The courts of Texas hold these offenses with low regard due to the nature of the crime and can be more strict on the punishment. Some of these crimes include Domestic violence, Child abuse, Interference with child custody orders, Bigamy, Violation of protective order, Sale or Purchase of Child, Prohibited Sexual Conduct, Continuous Violence Against the Family, Harboring Runaway Child, Agreement to Abduct From Custody, Unregulated Custody Transfer of Adopted Child, Violation of Certain Court Orders or Conditions of Bond in a Family Violence, Child Abuse or Neglect, Sexual Assault or Abuse, Indecent Assault, Stalking, or Trafficking Case, etc.

Offenses against the property

Whether you are a business, institution, or a single person, you can be charged with an offense against property. These crimes are Arson, Criminal Mischief, Robbery, Burglary, Theft, Fraud, Forgery, Money Laundering, Computer Crimes, Insurance Fraud, Medicaid Fraud, and Telecommunications fraud. These are serious offenses and are treated as such in the Texas courts. For theft accusations, the sentence will change based on the facts of your face. For instance, how much you are accused of taking will determine the severity of the charge. Also, whether this is your first offense is also weighed as well. However, if you are a recurring offender, your case could be considered a higher offense which could extend the potential amount of jail time.

Not only does the number of offenses and amount stolen matter, but also who you stole from. According to Texas law, if the offender purposely chose to deceive an elderly person, their sentence could change to be one grade higher in severity thus, more penalties, fees, and jail time.

It’s important to note that each case is different in that the evidence and the circumstances will always be different from one case to another, that’s why it is important to contact a criminal defense attorney that can defend your case.

Stay Tuned For the Second Part of This Series!

At Manuel Diaz Law Firm, PC, our experienced attorneys will be able to help you during this difficult time. Take control of your future and gain the legal representation that can help guide you through the legal process. Our experienced lawyers will be able to determine how strong or weak your case is, prevent jail time or mitigate your sentence, analyze which plea bargains (if any) are better for your individual situation, or go to trial for you.